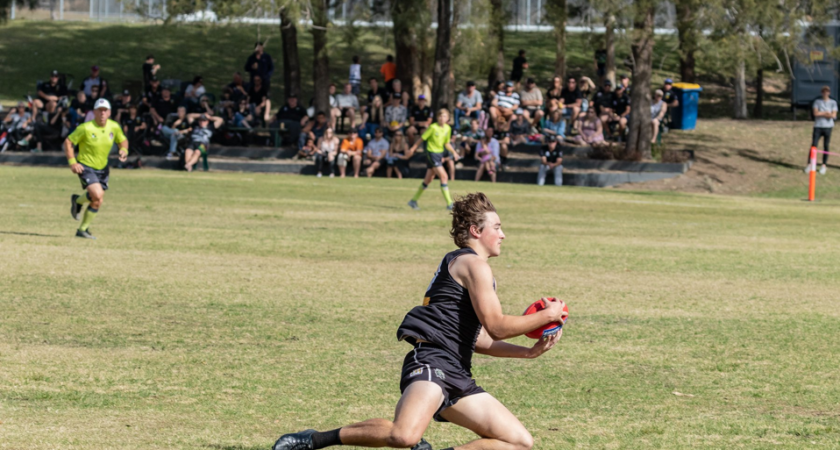 Pirates scuttle the Blues to make the Grand Final

MINOR premiers Park Ridge came back from a significant first-quarter deficit before advancing into the QFA Division 2 Grand Final with a strong win over Coolangatta on Saturday.

The Pirates took the Preliminary Final showdown 14.24 (108) to 12.13 (91) at the Park Ridge State High School and in doing so, qualified to tackle Beenleigh in the Grand Final at Yeronga next Sunday.

But they had to survive some anxious moments, especially in the opening term when Coolangatta kicked the opening four goals in only eight minutes and led by 23 points before the Pirates woke up.

After being shocked by Beenleigh in the second semi-final the previous weekend – only their second loss of the season – the Pirates regrouped and cut the deficit to four points by kicking the next three goals in a row.

And after the Blues landed the half-time and they never looked like relinquishing despite the efforts of the brave Blues.

“It was obviously wet, and it was tough and physical all day.

“Everybody had to earn their stripes out there.”

Adams conceded he concerned by the start Coolangatta had but once his players settled down and gathered momentum to the stage where they forged their lead and maintained it.

“They (Coolangatta) kicked some from where they shouldn’t have, and we missed with some easy shots.”

That area – kicking 24 behinds – is something that has to be addressed in the lead-up to the Grand Final because Saturday was not a one-off.

“We’ve had a lot of them this year (high behinds tally) so it’s something we’ve just to get right on the main day.”

Former Redland player Blake Passfield was outstanding for the Pirates in the middle while 16-year-old ruckman Riley Greene stood out despite his tender yards.

Guy Tarrant up forward and Tom Overington, a former Sandgate and Mt Gravatt star playing on-ball were two other stars for the Pirates.

The Pirates came through the clash unscathed and now comes a selection poser for the club in finalising their final 22 for the Beenleigh Grand Final showdown.

“You can’t fit 25 into 22,” said Adams of the selection dilemma coming up.
Coolangatta were magnificent in defeat in a loss that ends the best season in years for the southernmost Gold Coast club.

Scott Riordan, Wes Tate-Turvey, Dan Carey and Michael Hagan were best for the Blues who had ex-Morningside and Southport player Justin Wilson leading the scoring with four goals.

BOND University earned a second crack at Kenmore in next weekend’s Division 2 Grand Final by beating Alexandra Hills in the Preliminary Final on Saturday.

The Bullsharks took the sodden clash at Park Ridge High School by 9.18 (72) to 8.14 (62) to set up a rematch against Kenmore, their conquerors in the second semi-final.

There was a struck match between the Bullsharks and the Bombers for much of the clash.

Bond led by a point at quarter-time and by three points at half-time but Alex Hills responded with a third term of 2.5 to 1.3 for a five-point lead at the final break.

Yet the Bullsharks hit back and piled on 3.7 to 1.4 to seal a 10-point victory.
Standouts for Bond were Matt Ferguson, Joe Huitson, Richard McKeon and Nick Miller while for the Bombers their best were Blake Joseph, Jayden Fry, Griffin Golding and Dean Forster.