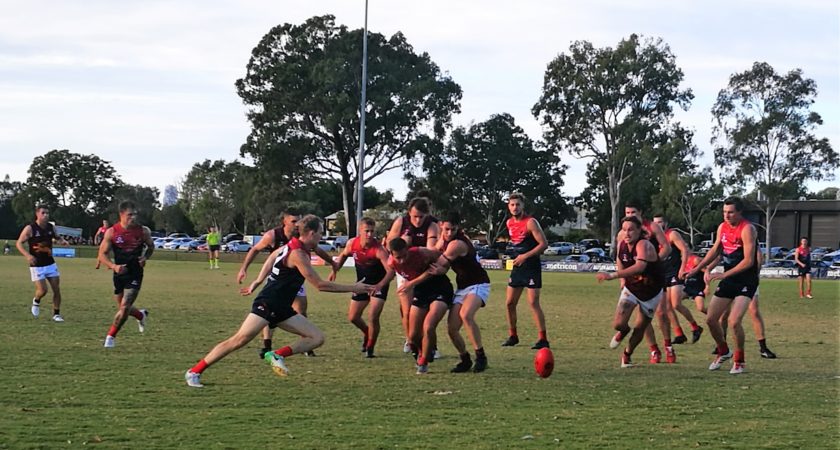 PALM Beach Currumbin limp into a badly needed bye next weekend after a hard-fought win over Gold Coast rivals Surfers Paradise at Sir Bruce Small Park on Saturday.
The Lions took the clash by 8.9 (57) to 6.10 (46) to maintain their unbeaten season but they finished bruised and battered after a game that was more about trench warfare than fast, open football.
It was a battle of attrition as PBC finished without a fit player on the bench and the Demons down two interchanges after the main break.
Going in without a number of key performers, the Lions lost rookie Corey Beaman (hamstring) early then Jarryd Douglas (concussion), Jimmy Holland (shoulder and hamstring) and had Josh Woolley with a badly corked thigh limping around the forward line.
“We needed the bye next week or else the Colts would have forfeited because we would have been taking all their players,” premiership coach Chad Owens said.
“So I was really proud of that today. It was our best win of the year, I thought, in terms of being able to fight, fight, fight.”
The struggle also claimed its victims in the Surfers camp with Southport NEAFL player Hayden Kiel’s game ending at quarter-time because of knee soreness and young Josh Matulis (shoulder) at half-time.
PBC always seemed to have the measure of their cross-city rivals, away from a five-minute period of the second quarter when the Dees cut a 27-point deficit to only eight when centre half-forward Tom Howard kicked three goals from clean marks.
“Apart from that burst we struggled up forward,” Surfers coach Brad Moore said.
“It really was a war of attrition, a brutal contest in terms of how close it was inside and not much ball getting outside.
“You had to win the ball yesterday because you were found out if you didn’t do that.
“It certainly wasn’t a pretty game, just a solid test, but for us defensively to keep Palmy to eight goals was a good effort.”
Hope still burns brightly in the Surfers camp, Moore pointing out that the Demons have now fallen just short in games against the leading flag contenders.
“We’ve played three top sides and fallen basically two or three goals short of them,” he said.
“We’ll keep on developing the young blokes and I think they’re not that far off.”
The Demons had key position defenders Jack Taylor and Sam Jewell as their best, lively midfielder Cassidy Haberfield added plenty of grunt to the packs and young ruckman Harris Newton again stood out.
Grogan Medallist Jason Burge continued his revival of form to be PBC’s best, along with fill-in ruckman Jed Harrison and centre half-back Dale Neuhaus who was consistently good away from the brief period when Howard finished off some good work from the Demons.
Owens was also pleased with the debut of Ashton Crossley, younger brother of new Gold Coast Sun Brayden.
“I thought Ashton was good on a wing,” Owens said. “He is so composed for a kid.
“And Hunter Hall (in his second game) was really big. Sure, he made a couple of errors but he takes the game on.
“We’d rather he make an error taking the game on than not.”
“And Lachie Torpy was also good.”
The battered Lions have been rewarded for their unbeaten streak by being booked in for a game of lawn bowls at Tugun rather than have a regulation training run on Tuesday night.

Tigers get a much-needed win

LABRADOR coach Aaron Shattock was not getting carried away with a desperately needed win by the Tigers against Sandgate on Saturday.
Last season’s beaten grand finalists downed Sandgate by 15.16 (106) to 4.9 (33) at Cooke-Murphy Oval for only their second win of the year.
It was a welcome change of fortunes but Shattock put things in perspective when he pointed to Sandgate’s savagely depleted status, stressing that there is still plenty of work to be done to get his side back into finals contention.
“A win definitely gets the mood back up but we really need to string a few more together,” Shattock said.
And that may be difficult given that the list of players sidelined could have a couple more additions through Tyson Stockwell (badly cut hand) and midfielder Tom Thorsen, who will miss a crunch game against Western Magpies next weekend because of family commitments.
After making nine changes to the side for their previous match, Labrador had 10 more for the Sandgate engagement.
“It is a big task for the players in there with things getting swapped around so much,” Shattock said.
Grogan Medallist Wayde Mills turned in another of his copybook dominant defensive games with his uncanny ability to read the ball and take clutch pressure marks again highlighted over the four quarters.
But the most pleasing thing for Shattock came from the future of Labrador – youngsters Joel Baxter, Brandon Gibbs and Anthony Djurovitch.
Baxter and Gibbs were on seniors debut and did not let the Tigers down.
Baxter played on a half-forward flank and kicked four goals, all before half-time.
Gibbss made his debut as a midfielder and did some nice things while Shattock said Djurovitch turned in his best game for the club as a midfielder/forward.
Across in the Sandgate camp coach Jarad Marsh said the Hawks left one of their key tactics back up the M1 to open proceedings – his side trailed by 55 points at the big break.
“We just lacked that enthusiasm and energy in the first half that lets us play our style,” Marsh said.
“I’ll give them a pass mark for the second half but the first half was when all the damage was done.
“There was no tackling pressure at all – and we do need that to be spot-on. It was not up to the required standard.”
Best for the Hawks were Benn McElligott who played on tall Tiger captain Bryce Retzlaff, Jackson Gray who rucked strongly and Jordan Harding who was solid in the midfield.

A STERN half-time spray from coach Brett Andrews that put his players’ minds back on the job was behind the success of the Cats against gallant Wilston Grange at Subaru Oval on Saturday.
Broadbeach took the game, and held on to third spot on the ladder, with a 22.10 (142) to 9.9 (63) victory but it was far from plain sailing after the home side slipped away from their game plan in the first half.
That was when the Grange took it right up to the home side and at one stage were only five points behind 12 minutes into the second term.
But whatever Andrews said to his players during the big break certainly worked because they responded with a third quarter of 11 goals to one, a burst that stretched a 22-point lead to one of 85 at three-quarter time.
The Gorillas definitely belied their position on standings as they fight a massive injury list. With a handful of their better performers back they threated a major upset until the Cats found their feet.
“They (Grange) were pretty good in the first half,” Andrews said. “Just when we thought we’d put them away they fought back.”
So what were the magic words that righted the ship?
“We talked about how we’d gone away from what we started with, we took the foot off the pedal.
“Our structures fail when we go into cruise mode and that is a huge problem because you can’t do that against good sides.
“The boys certainly acknowledged that at half-time and they responded accordingly.”
As former Gold Coast Suns AFL hopeful Matt Fowler turned it on up front with eight goals for the Cats, the club unearthed a handy support act in Nick Kempe, a half-forward with speed.
“Nick kicked four goals in the third term,” Andrews said. “He gave us some pace and he used the footy well.”
Liam Nelson was good on the ball and up forward and reigning best and fairest Evan Panozza stood out ion a rare run on the ball.
To their credit, the Gorillas stuck at it and actually “won” the fourth quarter after kicking three of their match total of nine goals in the last stanza.
Best for the Grange were Blake Nelis, Fletcher McIvor on his return from injury, Jack Lipscombe and Sam Gribble.
Next weekend Broadbeach are away to Sandgate at Lemke Road Oval and Wilston Grange head back down the M1 again to play Surfers Paradise at Sir Bruce Small Oval.

QWAFL One to Watch Round 9: Jemma Abbott
Bond University QWAFL Round 9 Review