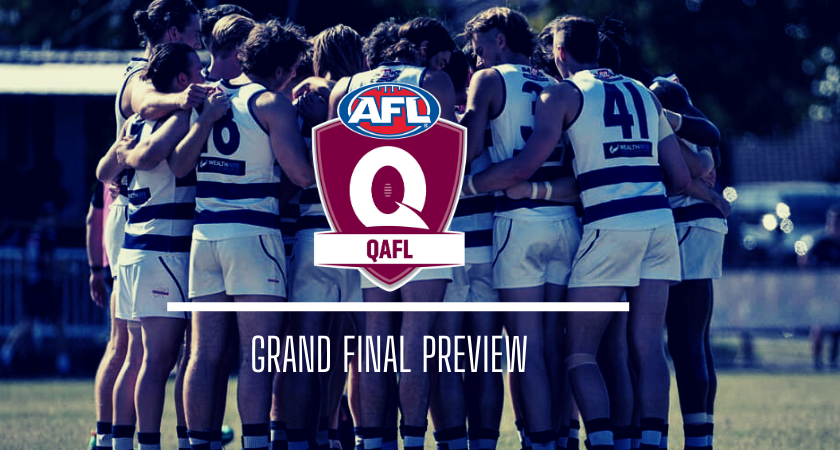 GRAND Final rivals Broadbeach and Morningside have been forced to make one change each for the QAFL premiership decider in Brisbane on Saturday.
Ironically both sides have lost an on-baller and replaced him with a ruckman– and strangely enough because the on-ballers both sustained broken legs last weekend.
The Cats have had to replace Nick Burton with ruck Jed Turner, a player well versed in premiership wins, while the Panthers have lost their on-ball star Henry Joyce and brought in ruck/forward Brad Dale.
This should be a ripping clash of the competition heavyweights with Broadbeach going in unbeaten and the Panthers going in with the one loss, that to Broadbeach.
It is a match between the best from the Gold Coast and Brisbane and a contest that gives Morningside the chance to end a five-season premiership drought for capital city clubs.
But for Broadbeach it is the chance to end a premiership drought that stretches back to 1996 in the old GCAFL.
Back then the Cats won all three grades and on Saturday they are represented in colts, reserves and seniors.
It is worth noting that Morningside is the last Brisbane club to win the QAFL flag, that being back in 2014 when the QAFL competition reformed in the wake of the NEAFL revamp.
Since then Labrador (twice), Palm Beach Currumbin (twice) and Surfers Paradise have landed the cup on the tourist strip.
In another coincidence rival coaches Craig O’Brien (Broadbeach) and Clint Watts (Morningside) have both been part of unbeaten premierships here in Queensland.
Of course O’Brien is the only one of the pair who can do it again after an unbeaten flag with Palm Beach Currumbin in 2007. That was in the AFLQ Division 2 competition.
Watts was a rising star with Southport when the Sharks became the last club to win a QAFL flag unbeaten. That was in 1999.
But all of that stuff remains in the record books and it all boils down to which team adapts better on the day.
Watts agreed that losing Joyce, after also previously losing Jack Rolls (hamstring) could be a worry.
“Yes, they are (losses) but whichever way the result goes I’ll not complain because we’ll back up the guys we’re bringing in,” he said.
Asked what are his biggest concerns about Broadbeach, remembering the Cats hammered the Panthers by 50 points in their final-round fixture, Watts said:
“I haven’t thought too much about that but they like to generate a lot of run off half-back – they’re a genuine running side.”
So what about that hiding they copped at Subaru Oval. Can the Panthers reverse the result?
“There were some other underlying reasons for that performance down there. The players were coming off two weeks of really hard training and we had some absentees on the day.
“What we saw was a fair bit of Broadbeach and we think we have a handle on how they go about it.”
His rival O’Brien, said the Cats are better balanced with big Jed Turner back in the side, a move that will allow last weekend’s ruck Stephen Mills to drop back to defence and play on Panther star and competition leading goalkicker Matt Hammelmann.
O’Brien still rates the Panther midfield as the best in the competition, even without Joyce and Rolls, and he feels if his side can get on top in that area it will go a long way towards winning.
He said defence is the key to his side. That is where attack starts from and provide good service to an attacking formation that will be hard for Morningside to keep quiet.
“Defence is the start of your attack,” he said. “If you can’t defend you can’t attack and you have to have Plan B if Plan A doesn’t work.
“The forwards are a key area for us because we have a lot of options up there.”
Broadbeach spent their last training night on a ground marked out to dimensions of Leyshon Park, which is significantly smaller than the Cats’ home base at Subaru Oval.
They hope it will work out better than the last time they did the same, in 2018 when the Cats lost to Palm Beach Currumbin in the grand final at Yeronga. 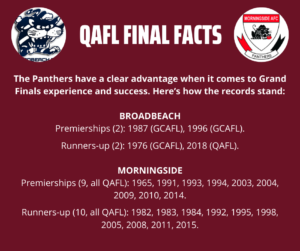 With 2020 marking 50 years of Football on the Downs, we look back at the past decade of Senior Football and the dominant teams and individuals of the Senior... [more]

Two significant contemporary Indigenous art murals were unveiled today that were painted as a lasting reminder and legacy of Brisbane hosting the 2020 Toyota... [more]