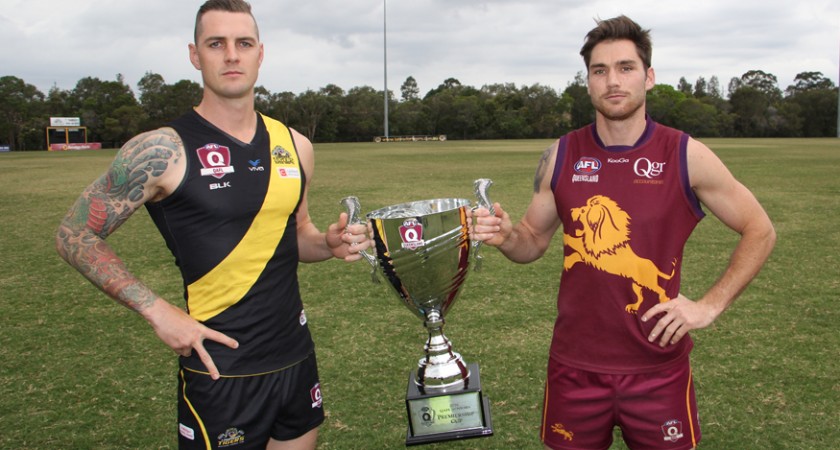 QAFL GRAND FINAL
Labrador vs. Palm Beach Currumbin
Saturday September 17, 2:10pm, Leyshon Park Yeronga
LIVE BLOG AND STREAM FROM 2:00PM
Tune into 612am in Brisbane or 91.7FM on the Gold Coast
for the ABC Grandstand call from 2pm

Tigers: Pressure. Backline spread. Isolating the forwards. The biggest difference between Labrador in the first half of the year to the second is the way they are hunting the ball. The personnel is mostly the same, but they understand each other a lot more.  If they can cause a turnover in the middle, watch them run.

Lions: Their last eight quarters have been their best of the year, and it’s been through their ability to win the contested ball, control the stoppages, and spread. If they get it cleanly on the outside they will be hard to stop.

What they will try and stop

Tigers: Have to cut the Lions off at the knees. If they slow them down and make the kick to a contest, Labrador has the bigger bodies and will win the battle in the air.

Lions: Can’t allow any clean delivery into the forwards, so must stop their rebound off the half-back line. Can’t allow guys like Mills, Hicks and Clarke to be running the ball 15 metres before they kick.

We have spoken about the key match ups HERE, so what are the key areas of the ground?

It’s going to be a midfield battle; win there, win the game. In terms of opposition watch, the Lions have to stop the Labrador forwards working together. Retzlaff, Baxter, Goldsmith, Coombe, and Featherstone can all kick a bag.

The Tigers will have to be careful of the Lions’ mosquito fleet. Chisholm showed last week he can play a role forward, Ashby will motor from one end of the ground to the other and Goody is always dangerous.

Tigers: The ball is in Todd Featherstone’s hands to win the game…. again

Tigers: Their kids – who have been so good – go back into their shells.

Lions: No run, being beaten in the contested ball and having to kick to a contest down the line.

Tigers: Bill Hicks. Barometer. If he plays well, the Tigers are entering their forward 50 more often than not.

Lions: If you’re looking for a bloke to win a game off his boot, look no further than Josh Woolley. Why? He did last week, and he has done it all year. If he gets off the chain and can kick three or four, I can’t see the Lions losing.

It was round 18, and it was for top spot on the ladder. The Lions jumped out the best, but after quarter time it was all yellow and black, with the Tigers eventual 58-point winners.

Tigers: Thorsen is out, but they have not mucked around with his replacement; Ryan Davey has been named, all the way from London! He hasn’t played since round 15 and wasn’t at training during the week; in fact, I think he lands today. So will he actually play? We will have to wait until tomorrow to find out.

Lions: Jarryd Douglas’ shoulder has come good and he will take his place back in the forward line. Unfortunately for Sam Stubbs, he makes way.

From about the halfway point of the year, a lot of you had penciled this clash in. All roads led to the Grand Final for these two.

If you still need convincing that this will be a cracker, check the history books.

Their last two encounters have been determined by a total of 11-points.

Morningside were victorious in both, but the game was up for grabs until the final seconds.

The Panthers have only been beaten once this year, which came at the hands of Sufers Paradise in round 14.

Labrador was beaten three times during the year, twice of those to Morningside, but their best has been outstanding.

The Tigers back six will have to put a lot of work into Ben Murray. He was the league leading goal kicker with 76 majors in the home and away season, and can single handedly turn a game on its head.

If he is given any separation on the lead, and the ball is delivered well, he could be the difference.

For the Tigers, with Bryce Perry-Bolt coaching from the box after knee surgery earlier this year, the scoring load falls in the shoulders of the likes of Michael Gugliotta and Riley Waters.

There isn’t going to be one genuine target, which might not necessarily be a bad thing. They become unpredictable, and it brings their midfielders who push forward into the game.

This game is set up to be pure. It will be one-on-one, it will be a battle of strength, and it should be pretty high scoring.

Can Labrador start the day on the right foot, or while Morningside continue their dominant year? 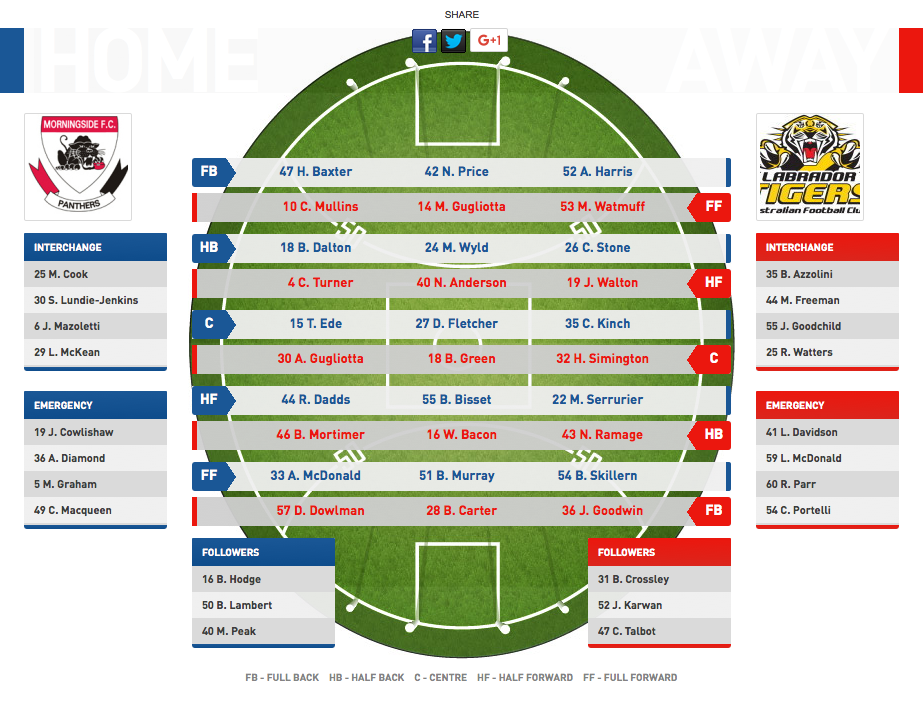