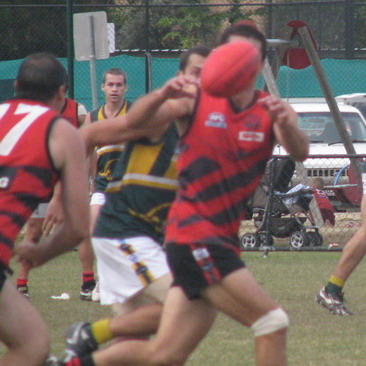 EIGHT months ago Burleigh’s games record-holder Aaron Pianta was adamant he was retiring after Burleigh lost the 2010 preliminary final to Noosa.
That ‘retirement’, even though at the time Pianta insisted he was finished, proved to be a furphy because the big forward resumed training earlier in the year and found the lure of footy too strong to resist.

And the Bombers must be grateful Pianta changed his mind because he was a star for them in the side’s 21.7 (133) to 10.13 (73) win over Maroochy-Northshore at Bill Godfrey Oval on Saturday.
Following a haul of four goals the previous round, Pianta finished with eight against the Roos, dominating after half-time when he kicked most of his tally.
All this came after Maroochy threatened a major upset with a quarter-time lead of 2.6to 1.0.

The Bombers fought back to lead by the solitary point at half-time, 6.3 to 5.8, but it was all one-way traffic after that.
With Pianta marking strongly, and with skipper Marcus Powell on fire in the middle – he also kicked four goals in a man-of-the-match performance – Burleigh ground the opposition down.
“We finished the game off,” said coach Zane Doubleday. “In the third and fourth quarters we put them away.
“Just to finish a side off was a positive for us.”
Pianta and Powell had strong support from tireless ruckman Mick Van Rossum and wingman Hugh Priest as the Bombers crept to within sight of a place in the top five.
Maroochy coach Roger Delaney should have been pleased by the fact the Roos had 23 scoring shots to 28, but described the second-half effort as ‘pretty average’.
“We weren’t playing terribly well, but we were right in it at half-time,” he said.
There were not many positives for Delaney away from the efforts of skipper David Hulsman in a back pocket, on-baller Jarrod Gale and Jarrod Clarke at centre half-forward.