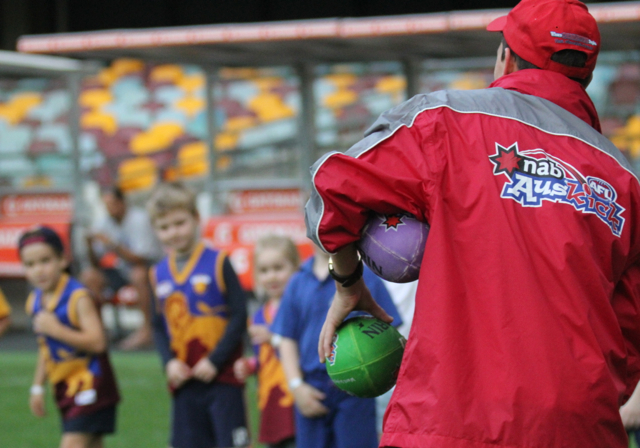 NAB AFL Auskick is back for 2015, marking the 20 year anniversary of the national program.

Over the last 20 years, NAB AFL Auskick has been providing boys and girls from aged five across Australia, with a fun and safe Australian Football experience which has served as an introduction to a lifetime of involvement in the game.

The program involves weekly coaching sessions in which children learn the skills of the game through modified activities where the emphasis is on fun and having a go.

The AFL will pay tribute to the 20 year milestone in Round Two of the Toyota AFL Premiership Season at all nine AFL matches, as NAB AFL Auskickers will all wear the number 20 on field at halftime.

AFL General Manager, People Customer and Community Dorothy Hisgrove said the NAB AFL Auskick is a program managed by the local community for the community, creating memories that will last a lifetime for Auskickers, families, volunteers and friends.

“As we celebrate 20 years of NAB AFL Auskick, we would like to acknowledge the 20,000 volunteers who dedicate their spare time to the program. It is through their passion and commitment that AFL Auskick continues to thrive.

“The AFL would also like to recognise NAB’s tremendous support and sponsorship of the AFL Auskick program which began in 2006 and has seen the program develop significantly over the years with nearly 180, 000 Auskickers registered in 2014 at over 2,800 centres around the country,” said Ms Hisgrove.

National Australia Bank’s General Manager Brand and Products Marketing , Kevin Ramsdale said, “NAB is delighted to be associated with the NAB AFL Auskick Program and we congratulate the AFL on their 20 year milestone. As a longstanding partner of the program, our support has allowed us to genuinely grow the game and play an active role within local communities”. “This year, we will continue to support local Auskick centres to grow the program and look forward to identifying 22 young stars through our NAB AFL Auskicker of the Year competition,” he continued.

As part of the 20 year anniversary celebration, throughout the season the AFL will share the stories of the many people who have contributed to the program over the last 20 years, whether they are Auskickers, volunteers, coaches, current AFL players or families.

NAB AFL Auskickers can see National AFL Auskick Ambassador Shane Crawford come to life on their screens talking about the AFL Auskick program and how to get involved, plus play our fun and innovative goal kicking game.

Fans can download the NAB AFL Auskick Central from the App Store on iPhone or iPad or the Google PlayTM Store.