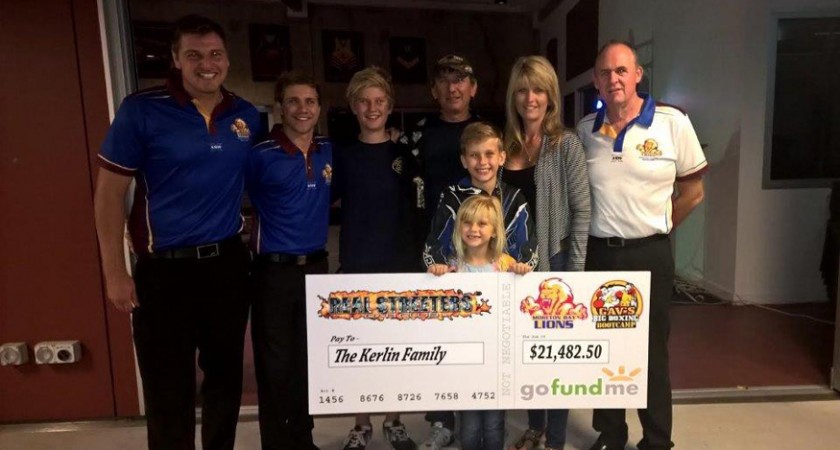 Six months ago, tragedy struck the Kerlin family when they lost everything in a house fire.

Husband and wife Les and Lisa, and their three kids Mitchell, Zac and Monique were left with nothing but the clothes on their back.

Through hard times footy clubs get around their members, and the Moreton Bay Football Club went above and beyond to help out their own.

On Saturday night, in conjunction with the Homestead Music Club, Real Streeters Car Club and Gav’s Big Boxing Boot Camp, the Lions presented the Kerlin family with a cheque for $21,482.50.

Eldest son Mitchell, a Lions under 14’s player was also given the opportunity to toss the coin before the Lions and Saints NAB Challenge match at Burpengary in February.

No matter how bad their own situation was, the Kerlin family was set on giving back to the club.

“They have been exceptional. During that NAB Challenge game Lisa came and did waitressing in the NAB function just as a little bit of payback I suppose for what we did for them. They are very humble,” Club Chairman Peter Smith said.

The money has been raised through the Lions Welfare and Education program, set up to help their members out in times of trouble.

“It’s a phenomenal amount of money, its marvelous what you can do in 6 months,” he said.

“From a club perspective, it was a good test for the new welfare and education policy, the support that came around from it strengthened the bond within our club to see what we can do to support our own.”

The day after the fire, Smith dropped off whatever they could find at the club for the family.

From that point, youngest son Zac became a Lion.

“Zac was a soccer player, and when he got the footy gear that day he told his mum he is not playing soccer anymore, he wants to play AFL,” Smith said.

The club and community rallied around the Kerlin family in their time of need.