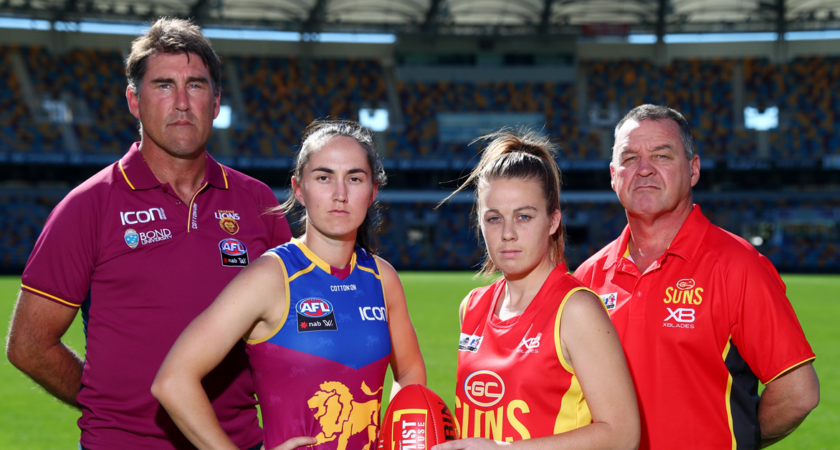 The two Queensland teams will make history as they go head-to-head this Saturday at the Gabba in the final match of the 2019 QW Winter Series.

For most of the Brisbane Lions and Gold Coast SUNS players, this match will be their first time playing at the AFL venue.

Lions coach Craig Starcevich said this opportunity to play on the hallowed turf is significant for the players in this major part of the 2019 AFL Queensland Women’s High Performance Strategy.

“It’s big for our group who have trained downstairs for three or four years and now they get a chance to run around on this ground,” Starcevich said.

This isn’t the first time the Brisbane side have had this opportunity to play at the Gabba though.

Lions utility Sharni Webb said the missed opportunity was a shame, but her side are excited to have another chance to play on their “spiritual home deck.”

“Year one to play the [grand final] here would have been a dream, but it didn’t happen,” Webb said.

“For us to get the chance to play here on Saturday is a dream come true… A few of us have played here on the one-off game years ago, but for us to get the actual Brisbane Lions Women’s team out here is going to be fantastic.”

This match will be closely watched by all Queensland footy supporters, but SUNS coach David Lake is putting emphasis on sorting out his talent in the high-quality contest.

Each game we’ve played has been a great opportunity for me to sort through what I’ve got, and the opportunity to play against good quality opposition has been really important,” Lake said.

“So the more the Lions can throw at us the better off we’re going to be… this weekend is really important for us.”

SUNS midfielder, and ex-Brisbane and North Melbourne player, Jamie Stanton said it’s good for all teams in the system to play at their AFL home ground.

“It has taken a long time to potentially play a game at the Gabba, we’ve obviously played a couple games at Metricon in the past,” she said. “So it’s nice to finally also give the Lions fans a bit of a taste of what it’s like to have a women’s game.”