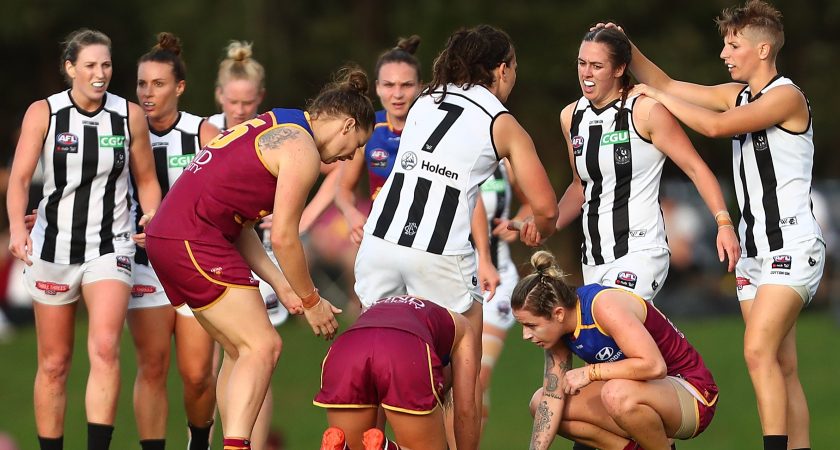 The Brisbane Lions’ hopes of returning to the Grand Final in 2018 have been slashed by Collingwood at Burpengary, suffering a 14-point loss at the hands of the away side on Saturday afternoon.

A chance at back-to-back appearances in the big dance is still a possibility for the Lions, including a must-win clash against Greater Western Sydney, but a number of results must go Brisbane’s way after the 8.5 (53) to 5.9 (39) defeat.

Entering the game sitting bottom of the ladder, Collingwood wasted no time inflicting first blood in the match, as Christina Bernardi snapped truly.

Before the first break, she added another to her name whilst maligned forward Moana Hope also produced two of her own.

Brisbane managed to stem the onslaught with two goals against the run of play in an opening term branded by unyielding physicality around the ball.

For the second consecutive Brisbane home game, rain persisted throughout the match, as the horizontal downpour meant play was stifled with rushed kicks and unflattering possession chains.

Scoring stalled in the second term as rain continued to fall, with two Lions’ behinds the only two scores produced before the main break.

Collingwood appeared more desperate in the third term, adding two goals to zip as their lead grew to a match-high of 32-points in the second half.

By the time Hope wheeled around and kicked her third goal – an inverse torpedo from 35m – the result was beyond doubt.

Brisbane finished the game with three goals in successive fashion, including a Kate Lutkins set shot from right on the boundary, yet the damage had already been done.

Now, Brisbane must beat the GIANTS next week, and sweat on both Adelaide and Melbourne – which both enjoyed big wins in Round 6 – to qualify for the Grand Final.

Emily Bates (20 disposals), Allie Anderson (18) and Kaitlyn Ashmore (11 and one goal) were all busy in the dreary conditions for the home side.

Lions’ head coach Craig Starcevich conceded his team was the second best on the day, ruing the chance Brisbane had let slip.

“The focus was to get a fast start and the opposite happened,” Starcevich told lions.com.au.

“Full credit to the opposition, their skill and execution and decision making under adverse conditions was exceptional.

“Destiny’s out of our hands, so now we’re watching results and hoping things go your way.

“They’re (players) disappointed, no doubt about it, they’ve let an opportunity slip.”

Brisbane’s crucial match against GWS will be played at Blacktown International Sportspark on Friday, March 16.

In 2018, Don't Believe in Never
Lions edge out Suns as Girls Ready for Under-18 Academy Series