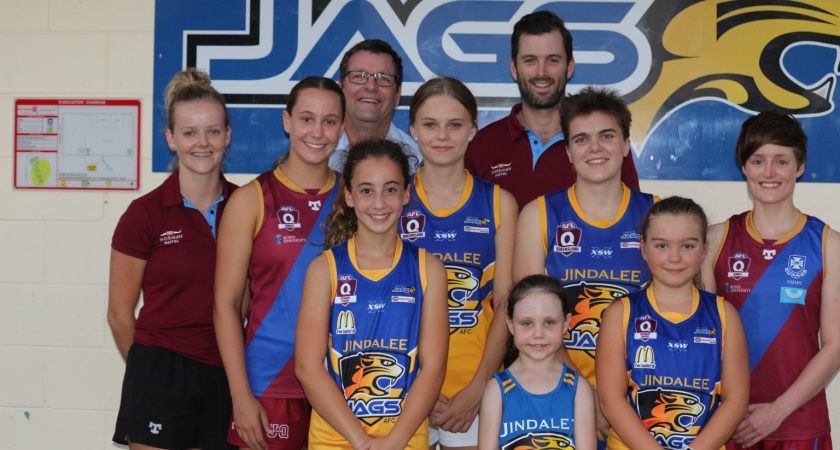 A landmark agreement between the University of Queensland Red Lions and Jindalee Jaguars was formalised last week to outline a clear pathway for female footballers in the region from junior and ranks to the QWAFL.

Both clubs, situated in Brisbane’s south-western suburbs, met together at Jindalee Football Club to finalise the arrangement. In the deal, UQ will assist in the development of female players, from junior and youth ranks to QWFA Division 1 at Jindalee.

The merger will also establish a pathway from Jindalee to UQ which will provide players opportunities to play football in the state’s premier women’s competition with the Red Lions in the QWAFL.

University of Queensland Head of Women’s Football, Marnie McGorm, said the biggest beneficiary of the agreement are the footballers themselves.

“It’s more of an understanding between the two clubs that we are linked in with each other to promote a female pathway from juniors to the state league and beyond,” she said.

“UQ don’t have that junior pathway ourselves and Jindalee, while they previously aspired to join the QWAFL, for the time being, they’d like to have something set up for their youngsters.

“Myself and Jindalee President Corey Sells have had a few discussions of where each club was at over the last couple of seasons and from Jindalee’s perspective, they would prefer their players have somewhere to go as they’re aging out.

UQ remains the only QWAFL club located in the western corridor, however have only ever fielded senior women’s teams and have no history at junior and youth level. In the deal, UQ have the opportunity to foster home-grown talent from the city’s west with the Jaguars.

Jindalee boasts a rich history of developing female talent in the region, having been in female competition since 2009. In 2015, they were the only club in Brisbane to field teams from all youth age groups along with a senior women’s side.

The two clubs have already a connection of sorts in the way of Brisbane Lion’s AFLW player Gabby Collingwood, who rose through the ranks at Jindalee as a youth player before transitioning to UQ where she was then drafted to the Lions with Pick 7 in the 2017 rookie draft.

Seven University of Queensland players have been drafted by Brisbane over the past two seasons, including Lions’ captain Emma Zielke and Bree Koenen and Sharni Webb, both who are yet to miss a game at AFLW level.

State Umpiring Academy panel raring to go in 2018
In 2018, Don't Believe in Never