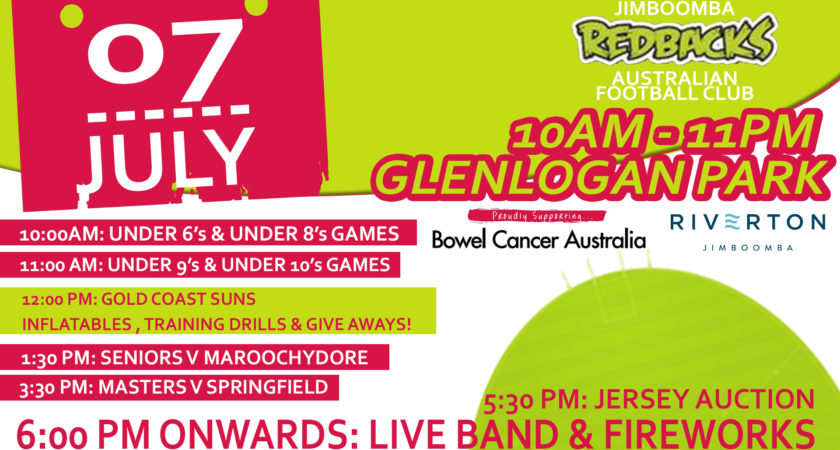 The Jimboomba Redbacks AFC will hold a charity fundraiser tomorrow, July 7, to raise money and awareness for Bowel Cancer Australia.

In 2018, over 17.000 new cases of bowel cancer are estimated to be diagnosed according to statistics from the Australian Cancer Research Fund.

The day’s festivities will begin at 10am and will last well into the night combining a number of football games and other organised activities for families of all ages.

At 1:30pm, in the marquee game of the day, Jimboomba’s senior team will play Maroochydore at 1:30pm.

The day’s final game, the Over 35s Masters, will play against Springfield at 3:30pm.

A V Jennings from Riverton Estate have donated two sets of guernseys for the Senior and Masters Jimboomba teams which feature the bowel cancer colours.

Both sets of guernseys will be sold and all proceeds will be donated to Bowel Cancer Australia.

Off the field, jumping castles, obstacle courses, face painting and a petting zoo will operate all day.

Representatives from the Gold Coast SUNS will be in attendance at 12:00pm to run a number of interactive training drills with those in attendance.

A live band will perform at 6pm before a firework display at 7pm – a befitting spectacle to conclude the day’s merriments.

Tomorrow’s Charity Round will be the sixth time Jimboomba have held a charity round in as many years, following on from years previous where the Redbacks have raised money for Breast Cancer, Prostate Cancer, Multiple Myeloma Cancer and Men’s Mental Health among others.

Jimboomba Redbacks club President, Stuart Greig, told aflq.com.au he was looking forward to the day ahead.

“The Jimboomba Redbacks are hoping to create awareness for Bowel Cancer by involving the local community in a family fun day of football,” Greig said.

“Bowel Cancer this year was chosen because one of our members family member has been diagnosed and we wanted to boost awareness.”