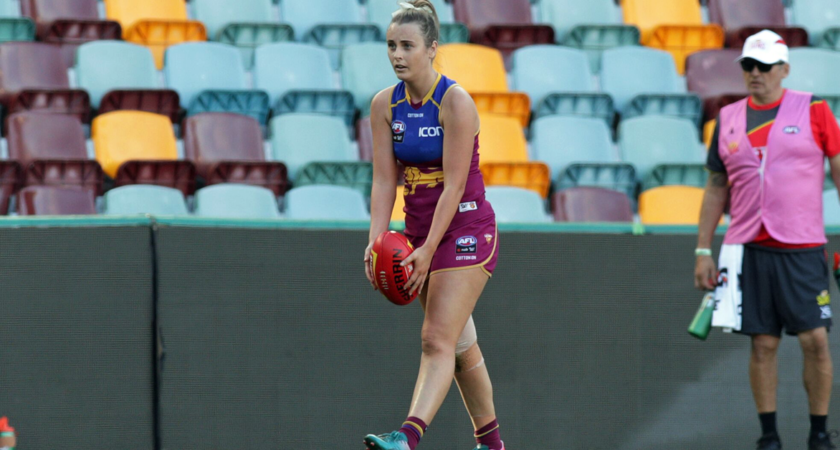 Brisbane wing Gabby Collingwood says the opportunity to play on the Gabba for the first time was something she’ll remember for a long time to come.

The 20-year-old played an important role in the Lions’ clean sweep in the QW Winter Series, lining up inside 50 where she produced a number of scoring opportunities in the team’s 7.8 (50) to 5.3 (33) win over their M1 rivals Gold Coast.

Collingwood, who will play her third season at AFLW level in 2020, has been a lifelong Brisbane fan since taking up the sport in 2011 and said the opportunity to finally play out on the Gabba – an opportunity that for various reasons has eluded the successful AFLW team since its inception – is a dream come true.

“It was unreal. The crowd was amazing. Just to hear them every time we kicked a goal or something big happened, it was unreal,” Collingwood told aflq.com.au.

“I haven’t seen this big of a crowd in a while so it was good to get out there and get a win on here.

“To be able to sing the song on the Gabba in our last game is unreal. To sing it in front of the crowd was really special.”

An estimate crowd of over 4000 people packed into the Gabba’s lower seating bowl to watch the final chapter in the two side’s tri-game series and the best contest was definitely saved for last.

Brisbane’s experience rose to the fray to help the side cap off another successful Winter Series campaign, led by familiar faces in Ally Anderson through the midfield and Emma Zielke across half-back.

But the team’s younger brigade also shone, with Jade Ellenger pivotal as an outside midfielder while Collingwood’s prescence inside 50 alongside three-goal hero Bri McFarlane, set the tone for the win.

Having dreamt of playing on the Lions’ spiritual home ever since she was a child, it was hard to wipe the smile of Collingwood’s face after the game as she soaked up the atmosphere with the big crowd that gathered to watch.

“Every little thing that you’d do out on the field the crowd is up and about. It’s really exciting and it really pushes you,” she said.

“I think going undefeated is always a positive, we’ve won six from six [in the Winter Series] which is always exciting.

“It’s always good to get the girls back together and play a few games in the off-season.”

For the SUNS, unlisted defender Jade Pregelj was a rock across half-back as she continues to push for a place on their inaugural team list in 2020 while midfielder Kate Surman and goal sneak Brittany Perry, who finished with two goals, were also impressive.