How a coaching masterstroke help deliver Coorparoo a Premiership 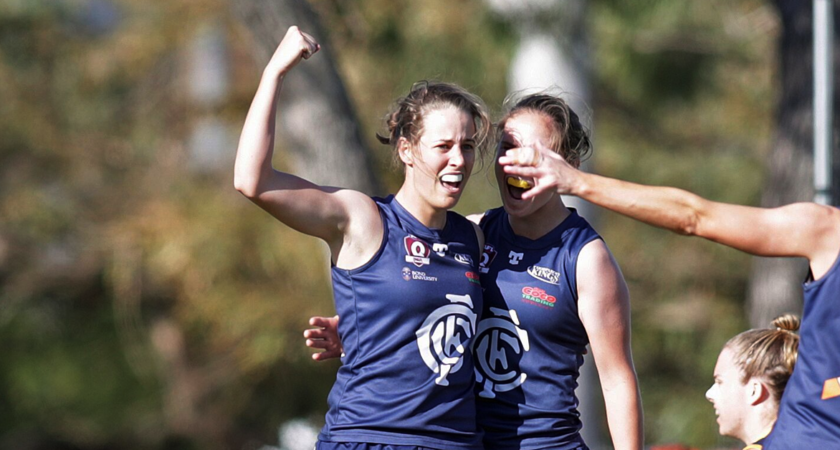 Coorparoo’s fate in the 2019 QAFLW Grand Final was sealed somewhere early in the second term.

The Kings, desperate to ensure a third straight loss in the title bout was not on the cards, had just booted their seventh goal of the game and Jesse Wardlaw’s third in just the eighth minute of play.

The goal handed the eventual premiers a 46-point lead against a Bull Sharks side who were yet to register even a behind.

Wardlaw’s conversion sealed the game before half time had even struck.

From the game’s opening bounce until the goal umpire waved his flags, it was evident Coorparoo were going to win, sans the Bond University comeback that was all but extinguished following her major.

It was 31 minutes that dictated the outcome of the season and repositioned Coorparoo as the juggernaut of the QAFLW.

Those 31 minutes were also the by-product of a Michael Hewitt coaching masterclass.

The third year Kings coach, never coy to implement left-field suggestions when shuffling the magnets, saved his latest move until the biggest game of the season, and biggest of his coaching tenure.

It was a move that came up trumps for the Kings and delivered their first premiership under Hewitt.

But perhaps most interestingly was that the move itself may not have even transpired if not for an event spurred in the team’s Preliminary Final win.

Emerging defender Hayley Moore had made a name as the Kings’ calm user across half-back in the second half of the season but after injuring her ankle in last week’s win, Hewitt was forced to look elsewhere for replacements.

The second half of the Kings’ season was a fruitful run for the side too.

After finding themselves in sixth place after Round 10, the team rallied, winning four straight games in the regular season and finals to book their spot in the Grand Final.

That run coincided with the emergence of Moore and reigning QAFLW Best and Fairest winner Tori Groves-Little, who had spent most of the season as a forward, across the back half.

But with Moore’s injury, Hewitt opted to also move Groves-Little back inside 50.

In their place, he thrust forward pair Jess Wuetschner and Tarni White, who had combined for five goals in their Preliminary Final win, to half-back.

Both moves – Wuetschner and White to half-back and Groves-Little to half-forward were moves that changed the landscape of the game and ultimately helped Coorparoo win the flag.

“It wasn’t to do with the opposition set-up, it was us,” Hewitt said following the win.

“Once we lost Hayley (Moore), we had three girls who were doing defence roles for us which meant we had no run and carry.

“We knew we could put Wuetschner back there and she did a job really well for us.

“The changes meant we needed two of our five [forwards] to go back so that’s why Tarni [White] went back. That gave us that kick, the smarts and the run that we needed back there.”

The pairing of White and Wuetschner across half-back was a lethal combination. Together, the pair formed a wall and were a large factor in the Bull Sharks’ struggled moving forward of centre.

But the changes also meant the Kings’ forward structure was altered, especially considering Paige Parker, also a forward, was moved up to a wing.

Of course, Parker went on to win the best on ground medal – another tick for Hewitt’s coaching strategy, while the forward line, even without the usual suspects on the team sheet, also fired.

“We put the faith in our forward line to kick the goals without Wuetschner, White and Parker and that paid off,” Hewitt said.

Wardlaw finished with six majors while Emma Zielke kicked three and Groves-Little – instrumental in setting the tone in the opening term – added two of her own.

While forced, Hewitt’s willingness to be risky and change his team’s winning formula was an unprecedented move and one that meant he was always one step ahead of the Bull Sharks.

It’s unknown what may have transpired in the Grand Final had Moore not gotten injured and Hewitt did not pull the trigger on the risky changes to the line-up.

What we do know is that the moves worked, whether by the somewhat forced nature of them or by the stroke of coaching genius from Hewitt in the biggest game of his coaching career.

And the Kings are better off because of it – they’re Premiers after all.