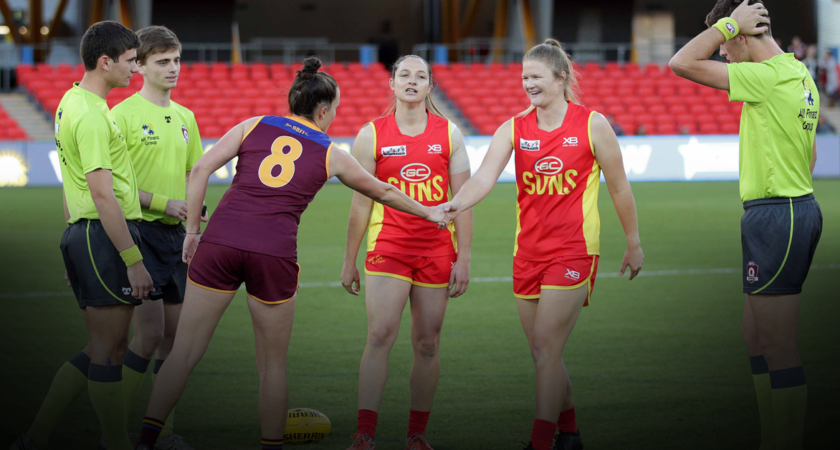 Three matches will be held from May to July between the two Queensland sides, culminating in a Queensland v WA representative match at Optus Stadium on Saturday 20 July.

The first match of the three game series will be held at Metricon Stadium on Saturday 25 May, in a triple header event. The Gold Coast SUNS NEAFL side will take on the Sydney Swans to open the day, followed by the QW Series Match ahead of the Gold Coast SUNS v Geelong Cats AFL headliner.

The second fixture will be held at Great Barrier Reef Arena, Mackay, on Sunday 23 June.

The final match will be held as a stand alone fixture at the Gabba on Saturday 13 July.

The QW Winter Series is a major part of the 2019 AFL Queensland Women’s High Performance Strategy, which aims to provide regular access for the Brisbane Lions and Gold Coast SUNS to develop current and future AFLW players.

Kath Newman, AFL Queensland- State Female Talent Manager, said that growing and developing the talent pool for AFLW clubs is a major focus for the program.

“The QW Winter Series teams will be made up of current and prospective AFLW players.”

“By providing opportunities for elite female players to develop their skills during the winter  we are aiming for the QAFLW to become the preferred high performance competition for talented female players” she added.

“The QW Winter Series is a great opportunity for us to trial our Hyundai Help for Kids Lions Academy players in an elite setting,” Starcevich said

“It’s also important for us to reconnect as a group and train together during the off-season and integrate our academy players with the main group.

“All three games are going to be played at high quality venues, which is a fantastic opportunity for our players.”

“As a club, we’re really excited for the upcoming QW Winter Series, as we look to build on our preparations for entry into the AFLW competition in 2020,” Lake said.

“It’s a great opportunity to continue to shape and give experiences to both our on-field and off-field teams whilst playing at top class venues around the country.”