From Scotland to the Gabba? 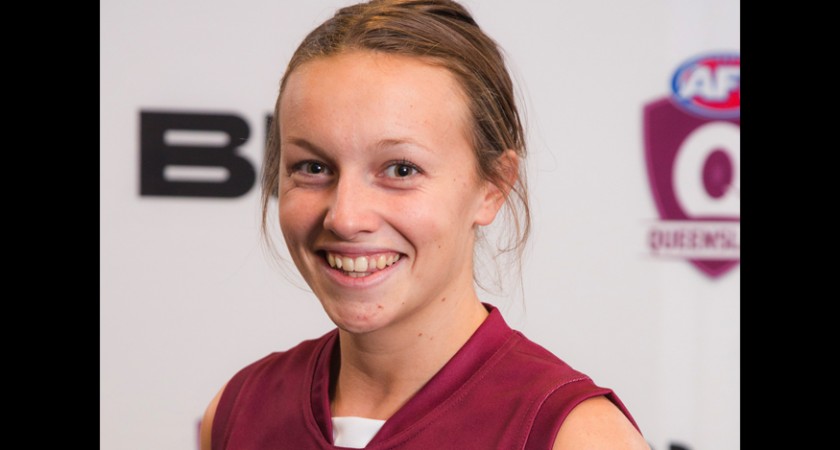 Her journey may have started in Scotland, but Jemma Abbott is hoping it ends up on the Gabba.

Abbot, 17, a member of the Queensland Youth Girl’s Academy and Maroochydore QWAFA player, was born and lived in Scotland until she was nine.

With her parents chasing a better lifestyle, the Abbott family packed up and headed to the Sunshine Coast.

Speaking to her on the phone, you almost wouldn’t believe she spent over half her life abroad… the Scottish accent is long gone.

Growing up in Scotland meant the football she played was of the round ball variety. That was until year nine.

“I had no idea what Australian footy was. My science teacher at Mountain Creek High was the footy coach for the Mountain Creek Football Club.” Abbott said

“The teacher took us down to the oval because of our kicking skills, so that’s how I got into it.

“It was so different, especially because of the shape of the ball. It was hard to figure out, how to first play, but once I got the hang of it was really good.”

It wasn’t just Jemma who was learning the game on the fly; she took her parents along for the ride.

“They had no clue what it was, but encouraged me to give it a go,” she said.

“Mum was friends with one of my teammates mums, so they went to the games together, and talked her through it.

“Mum is now the manager for our team at Maroochydore.”

Even the visiting relatives get down to the fence for a look.

“When my family are out here, they always come and watch games. They don’t really understand it, but they enjoy watching it,” she said.

For those who watched Abbott play in her first few years, her talent was clear.

Once she made the Sunshine Coast Under 16 representative team, and the Queensland Under 16 School Girls team, it was obvious she was something special.

Following two outstanding Sunshine Coast campaigns, Abbott was selected in the Queensland Youth Girls Academy and represented the state at the Youth Girls Nationals in Melbourne this year.

That’s when things really got serious.

“It’s been great, every training session I get better, the intensity it great, and it’s really helped me as a player,” Abbott said.

With the 2017 National Women’s League approaching, it’s no longer just a game.

“Yeah it is a career path now, what I want to focus on is getting drafted, it’s exciting,” she said.

To achieve that, Abbott has one more year of qualification for the youth girls team, and her sights set on the QWAFL in 2017.

It’s not just on the field she is contributing though.

“I run Auskick as well, so it’s great to be able to help kids out, it’s great that there is something these girls can look up to,” she said.

Scotland could have a new sports star in a few years.