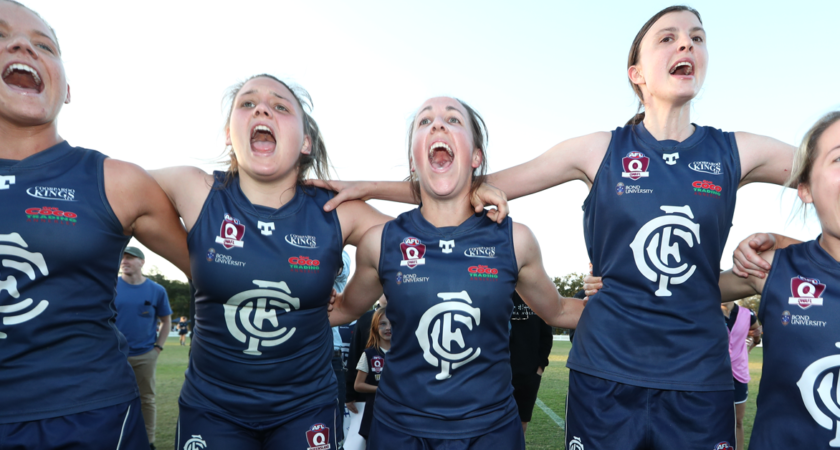 It’s taken three long years but Coorparoo are back at the pinnacle of senior women’s football in Queensland following an annihilation of Bond University by 76-points at Leyshon Park.

For long, Coorparoo ruled the roost in the QAFLW but recent season have seen them fall at the last hurdle.

Having lost the previous two QAFLW deciders, Coorparoo wasted no time ensuring that same fate wouldn’t be repeated for the third.

Kings coach Michael Hewitt said it was great to finally get to break the teams’ Grand Final duck.

“It’s great. The monkey is off the back,” Hewitt told aflq.com.au.

“To lose three in a row, people would probably start to talk about our program but I think this just solidifies how good our program is.”

The Kings, propelled by the exuberance of Tori Groves-Little who was shifted to half-forward for the clash, kicked an unassailable lead in the opening term including three majors inside the opening two minutes.

Instead, it was Coorparoo’s old brigade – Emma Zielke and Sally Young – who lead from the front.

Jesse Wardlaw opened the scoring in the first minute – a reward for Hillman’s efforts in the middle which saw her grab the ball out of the ruck before Jade Ellenger propelled the ball forward.

Jess Wuetschner, who was shifted back to half-back in a Michael Hewitt coaching masterclass, paid immediate dividends.

The usual forward paired with Tarni White at the back to help the Kings keep Bond University out of their forward 50 for the opening ten minutes of play.

Coorparoo kicked six for the quarter – a result that came against a wind – while Bond University were shocked.

The Bull Sharks struggled to move the ball forward and when they did, it was Wuetschner, White and talented defender Charlotte Edmunds – who was superb on Kalinda Howarth – who mopped up.

Jesse Wardlaw’s opening dominance was quickly meted with a coaching chance from Bull Sharks coach Shane Atkins, who moved Tiara Ernst from centre-half-forward to full back.

The moved worked somewhat but Wardlaw remained relentless in her grasp on the game, kicking two more in the second term to extend Coorparoo’s lead and take her overall tally to four at the main break.

A stalemate ensued in the third with neither side able to reopen the scoring inside the first nine minutes despite ample opportunities at either end.

Molly Ritson broke the Bull Sharks’ drought in the 11th minute but by that stage, there really was no coming back – a sentiment drilled in again just two minutes later when Emma Zielke kicked her second of the game.

It was a vintage performance for Zielke, who produced one of her best games in the navy blue of Coorparoo.

She finished with three goals but was largely unmatchable both inside 50 and further up the ground.

In all, Coorparoo’s class in every facet of the ground shone through. Whether that was Paige Parker on a wing, Tarni White across half-back and the unrivalled combination of Zielke and Wardlaw inside 50.

From tenth on the ladder to a breakthrough premiership – it’s been a tough season but a deserved premier.