Caboolture on show for Festival of Football 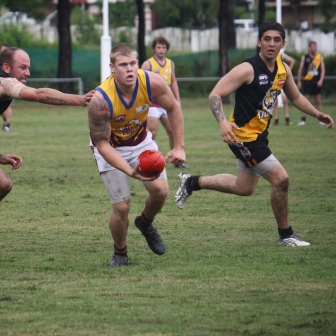 Pleming said the side, which has been training at the new Moreton Bay Regional Sports Complex over pre-season, had gone from the “pool house to the penthouse” and Saturday’s event will be a great showcase for the club.

Moving from Alexander Barr Oval this season, Pleming said he hoped the Festival of Football would bring more people to the club to play or just to watch.

“Having a good venue helps,” he said.

“People feel better about going to good grounds, and we have a nice undercover area and just better facilities.

“The area’s becoming a strong sporting area with good facilities and that’s fantastic for the future.”

Playing as a curtain-raiser to the Brisbane Lions and Sydney Swans practice match, Pleming said the players were excited to be a part of the Festival.

“It’s going to be pretty surreal, having Brisbane and Sydney play there, even just being in change rooms near them,” he said.

“We’re all looking forward to it.”

And with thousands of people expected to turn out for the day, which includes five games of football ranging from community to AFL level, Pleming said it would prove a rare opportunity for his players.

“They’ll get to play in front of a decent sized crowd and there’ll be a good atmosphere,” he said.

“Brisbane has played a couple of intra-club matches up there already and that’s been great for lifting the profile of the precinct.”

Caboolture will face off against local rivals Redcliffe for the Councillors Cup, with the Lions keen to take first bragging rights on their new home turf.

“They’ve been our main rival for the last five or six years and it will be good for them to play in front of that crowd as well,” Pleming said.

There was one person in particular Pleming was hoping to see amongst the throng at Burpengary on Saturday, lining up in the Lions v Swans match.

Caboolture takes on Redcliffe to kick off the Moreton Bay Festival of Football on Saturday March 8 at 11:15am.

The rest of the day will include the official opening of the precinct, a NEAFL match between the Brisbane Lions Reserves and  Aspley (11am), the Caboolture women’s team playing Narangba (1:15pm) and the Brisbane Lions v Sydney Swans at 2:30pm.

For ticket information, head to http://www.moretonbay.qld.gov.au/burpengaryafl/