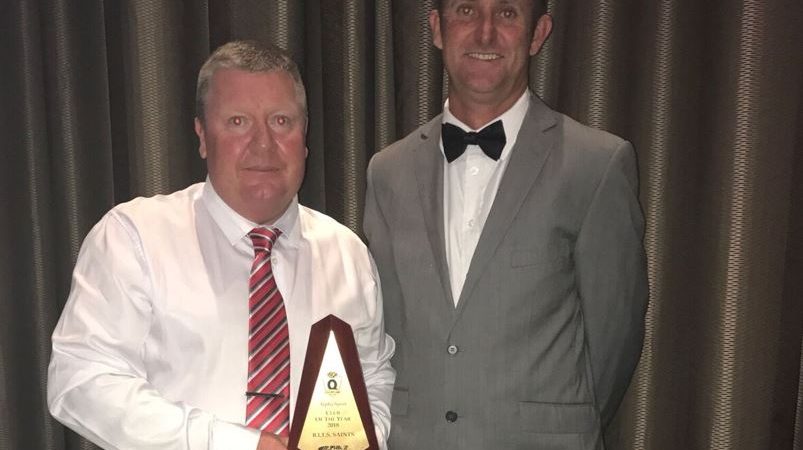 The first regional club to be recognised for the prestigeous honour, Boyne Island Tannum Sands Saints AFC have been historically awarded the 2018 AFL Queensland Alpha Sport Club of the Year at their annual club awards evening last night.

The AFLQ Alpha Sport Club of the Year is awarded to the Club that best meets a set of criteria including; club core values, quality governance, best practice volunteer support & engagement, as well as their on field performance and conduct. It also recognises a club for their facility development and community enagagement.

In a true reflection of the clubs community values, President Andrew McMahon elected to have the award presented at the club’s own awards evening, rather than in Brisbane at the AFL Queensland Community Gala Awards night.

McMahon said, “I’d rather it up here, its more about the people, the team and the club. Not just one person receiving the award.”

“The biggest award we give out at our presentation night is for our volunteer of the year, because that person is the backbone of our footy club that goes above and beyond. To have your name on that trophy is an honour.”

“We try to be positive and proactive, our footy club is about making a difference. If we expect people to come through the gate and pay money, then we are prepared to give back through our time and our labor in supporting community initiatives.”

Brad Matheson, AFL Capricornia Competition and Club Development Manager, attended the BITS Saints Awards Night to present them with their trophy. He paid tribute to the club’s tenacity and professionalism in the face of challenges, along with the community culture they have built.

Matheson said, “the Club has worked tirelessly to develop a strategic plan and over the past 5 years they have overseen over half a million dollars of projects being completed, most noticeably a lighting upgrade, female amenities upgrade and most recently the addition of a top quality administration facility.”

“The BITS Saints have continued community engagement through programs such as their BITS Backyard Blitz, Bella the Brave and raising awareness of Men’s Mental Health, exemplifying the culture within the Club. This culture is carried on to the field and is evident through in the depth in numbers within the Club from juniors right through to Friday Night Football .”

AFL Queensland State Football Operations Manager, Barry Gibson, said, “The BITS Saints are the first ever club outside South East Queensland to win the AFL Queensland Club of the Year. This is a terrific achievement and a recognition of not just the fantastic year the club has had, but the culmination of a lot of hard work over a sustained period.”

Whilst working to reach their goals, there are four little words that they adhere to along the way; “LET’S JUST HAVE FUN”.

BITS Saints in the Community

BITS Backyard Blitz
On Australia Day each year the BITS Saints run a morning of BITS BACKYARD BLITZ.  They identify three families who need a hand in our local community through ads run in the local classifieds page on Facebook. On Australia Day morning we gather our tools, mowers and teams and head out to lend a hand to those who are less fortunate.

BELLA the BRAVE Day
Players from BITS Saints wore yellow arm bands as part of Cancer Awareness Month in the game against Rockhampton Brothers at BITS Oval. Veteran Saints player Keith Bilston heldthe day close to his heart because Bella Bates, at 13 months, was diagnosed with anaplastic ependymoma, an aggressive form of brain cancer in September 2016. Bella is the daughter of Bilston wife Haley’s best friend Robin Berthelsen and the now almost three-year-old is cancer free after eight brain surgeries and numerous rounds of chemotherapy. She also spent a large chunk of her young life in hospital.

Men’s Health Awareness
This event was centred around the clubs annual $1000 Draw night. The club purchased BITS Saints beanies  and donated the proceeds to the Movember foundation.

This year over $3,200 was raised to this worthy cause.

The BITS Saints are driven to provide equality within their Club.  What they spend on the A Grade team is no different to what we spend on the U/9’s.  It is their goal to ensure all kids, mums & dads, players, sponsors, life members and special guests walk away from every event at the Saints with a positive experience.