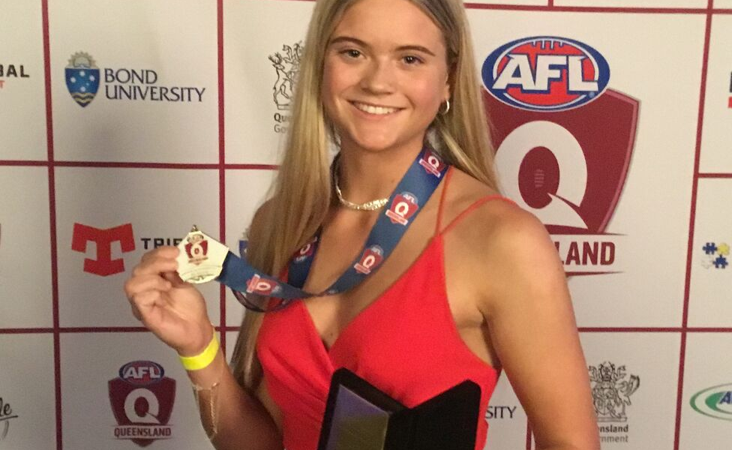 Rowan Page from Springwood has gone back to back in the QFA Division 1 Best & Fairest, receiving the honour at the AFL Queensland Football Awards Dinner held at the Royal International Convention Centre on Saturday evening.

Despite missing the first few rounds, the prolific ball winner polled 26 votes, seven votes clear of 19 year old runner up Jake Warren from Maroochydore who finished the year on 19.

In the QWFA competition, Lily Postlethwaite from Moreton Bay took out the Division 1 Best & Fairest honour.

Still shy of her 17th birthday later this month, Postlethwaite polled 20 Best & Fairest votes to take out the title ahead of runner up Amy Duxfield from Coorparoo (18 votes).

Postlethwaite has played for Moreton Bay since 2015; kicking 10 goals for them this season. This year she was named among the ten Queenslanders chosen for the Under 18 National All Stars game, going on to be named as one of Queensland’s six All Australians.

In recognition of his outstanding contribution to the game in Queensland, the 2018 State Volunteer of the Year was awarded to Mark Mason from AFL Wide Bay.

Mark has gone above and beyond yet again with the best interests of AFL in Queensland, often putting AFL before his own needs. One of his many achievements include being the driving force behind the establishment of the AFL Wide Bay Women’s League earlier this year.

Dean Warren, AFL Queensland CEO said, “Mark has worked tirelessly all year to engage new sponsorship opportunities, liaised with community members to develop links between local clubs and schools, and was the driver behind the Wide Bay Senior Representative team.”

“Mark is a person of utmost integrity and extremely passionate about AFL in our Region.”

Richard Fell of Mayne Tigers was honoured for his Outstanding Long Service to the game.

Fell has been associated with the Mayne Football Club since 1968 when he emigrated from the United Kingdom as a young man. He and his supportive family continue to help the club keep it colours flying high.

When awarding Richard with his honour, Dean Warren said, “Dick is a Life Member, a living legend of the Mayne Tigers and a person worthy of recognition for his many years of service to AFL.”

The top volunteer honours of the year, the AFL Queensland Merit Awards, were given to Warren Selvage and Peter Margetts.

Selvedge, a Sherwood Magpie Junior in the 1960’s, went on to play in a prolific nine Premierships for their invincible Senior side. He added two more to his tally when he moved to Townsville and played for the Currajong Blues.

At the completion of his playing career Selvedge took up the umpiring whistle, then went on to contribute to the Sunshine Coast AFL community as an administrator in the early 2000’s. Among many other achievements he stood as President from 2013 to 2016 and was a member of the AFL Queensland Advisory Board for South East Queensland Juniors.

Of Selvedge’s contribution to the game, Barry Gibson, AFL Queensland State Football Operations Manager said, “During the early years of Sherwood’s amazing Premiership era Selvage coached junior teams and served on various committees. In 1981 and 1982 he was the Captain-Coach of the club’s last two Premierships in the SQAFA.”

“With over 50 years service to Queensland AFL, across numerous regions and levels of the game, Warren is a deserving recipient of our most prestigious volunteer honour.”

Likewise Margetts has had a significant impact on the game of AFL in Queensland.

Starting his football journey with Coolangatta in 1978, Margetts moved on to volunteering for half time Auskick and Little League when the Brisbane Bears started playing at Carrara, moving with them when they went to the Gabba.

He has been volunteering ever since.

For years Margetts would drive from his home on the Sunshine Coast down to Helensvale to collect is father, and then back up to the Gabba for the match. Doing the same trip after the game. Even the night matches.

Gibson said, “Thousands of children have had a half time experience because of Peter, even some AFL players remember him being there when they had the opportunity to play at half time.”

“His personal sacrifice for the game he loves, over more than 40 years, makes Peter Margetts another worthy Merit Award Winner.”

2018 Volunteer of the Year Awards

The Volunteer of the Year Award is designed to recognise the valuable contribution that volunteers make to their club, league and sport. Eligibility criteria includes actively contributing to the objectives of the Club and community in a volunteer capacity during the award period, playing an active role in assisting with the delivery of programs and services to the members of the club and presentation of a positive image for the club and AFL.

Outstanding Long Service to the Game

The Long Service Award is awarded to volunteers who have rendered exceptional service to their club and to AFL. Typically, the awardee would have completed at least ten (10) years of club service. The Outstanding Long Services to the Game award, recognises an outstanding contribution to our game over a long period of service. This is state level award, one of only three such awards presented in Queensland each year, amongst the thousands of volunteers in the game.

The Merit Award is the highest honour awarded to volunteers who have provided 10 or more years of outstanding service to community football. AFL Queensland awards two Merit Awards each year.

2018 Administrator of the Year

The Club Administrator of the Year Award gives recognition to a club administrator who has advanced the professionalism and results of their club.

The Coach of the Year Award is awarded to a coach who has excelled throughout the season.

2018 Community Umpire of the Year

The AFL Queensland Community Umpire of the Year award is awarded to an umpire in the Community who not only shows that they are an outstanding umpire; dedicated to their craft, but they also go above and beyond to make the community better.

The Graydon Poulsen Award was instituted in 2007 in recognition of the Nambour Football Club and, in particular the Under 18 player’s, contribution to the participation of Graydon Poulsen in under age football. Due to his team mate’s commitment, Graydon, despite having personal challenges, was able to play football with considerable success. Awarded to a club with a Colts teams that has demonstrated an exceptional level of support for an individual within the club.

The Bill Ryan Trophy is awarded to the most valued QFA Division 1 player, as voted by the Coaches.
2018 Winner: Mitchell Scholard, Maroochydore