A three-pronged forward set up: 5 things we learned from Brisbane’s AFLW win over Adelaide 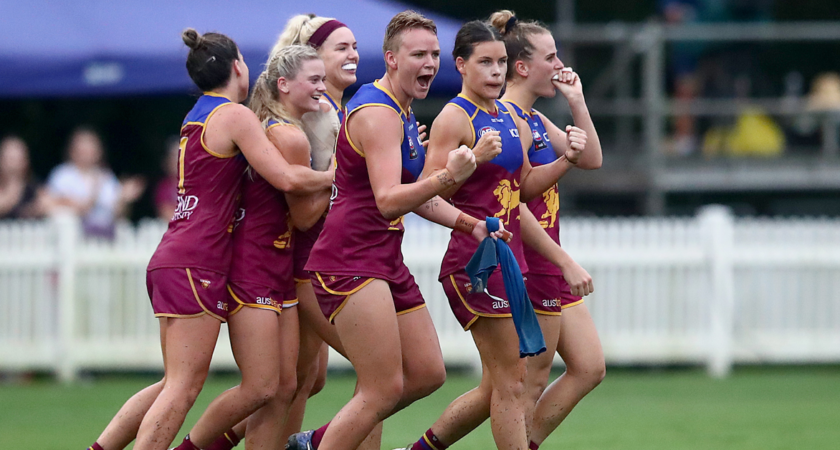 When Brisbane named their team for the opening weekend of action, of course, there were some glaring differences from the side that rounded out the 2019 season. Kate McCarthy, Sabrina Frederick and McKenzie Dowrick have all moved on to pastures new, but the Lions – but the early indications – look to have covered for the losses through the draft. More often than not, when the Lions were transitioning forward, players often looked to three key players. Dakota Davidson was the first player in the three-player chain, playing high and forced to crash contests and take contested marks outside 50. The University of Queensland product, in her debut, finished with eight disposals and two marks. Next, it was Jess Wuetschner, who was crucial in Brisbane’s blitzkrieg opening term. She took an early mark and played a role in setting up the team’s first goal. Playing deep was Jesse Wardlaw, who like Davidson, presented well and took several key marks. While the signs are still early, all indications are looking positive thus far.

The Lions are willing to play aggressive

Football is a territory game and from the get-go, it was evident the Lions were willing to move the ball forward quickly. Adelaide dominated the disposal count but it was Brisbane in a tradition counter-attacking style, who did the most damage. Their group of midfielders, which runs deep too, simply overpowered the undermanned Crows unit with Emily Bates and Lily Postlethwaite the prime movers in the middle of the ground. Brisbane’s daring game plan was helped by the continual presence of what the team call the link forward – often Wuetschner, Lauren Arnell or Orla O’Dwyer, who found themselves in space and produced mismatches for the Crows in defence. From that, the Lions could either run at the defence and create the overlap by hand or kick long and high over the mismatched defender to produce a marking opportunity.

While Brisbane’s new forward setup may have stole the show, it’d be rather remiss not to give credit to their stoic defence. The Lions’ usual suspects, Kate Lutkins (15 disposals, seven marks) and Shannon Campbell (four marks), performed admirably, it was again their new crop who rose to the fray. Adelaide produced more inside 50 yet both of their goals came via lucky goal-square toe-pokes by Courtney Gum and Nikki Gore. While her stat line may not read that impressive, Nat Grider locked down Steve-Lee Thompson with great affect and Cathy Svarc continued to repel the Crows’ inside 50 with great affect. Utility Sharni Webb operated off half-back while Emma Zielke and Bree Koenen also rotated through the defensive setup adding extra experience and versatility.

Brisbane have rebuilt their depth

A win is always impressive, of course. But what made this win particularly special is the foot soldiers who played a part for the Lions. For much of the teams’ existence, Brisbane have often been reliant on a number of their more experienced players but against the Crows on Saturday afternoon, it wasn’t 2019 Best and Fairest winner Ally Anderson was rather quite for her usual lofty expectations despite eventually working her way into the contest later in the fray to finish with 16 disposals. The same theme was present with both captain and vice-captain pair Emma Zielke and Sharni Webb, who had 15 and 8 disposals respectively. The aforementioned pair did rotate through the back line and thus potentially curbed their usual influence in the middle of the ground, however. To have that depth and among of contributors is a genuine positive for the Lions’ brass and should they need to share the load later in the season, the team will undoubtedly be better off for it.

Brisbane can cement themselves as the fast-starters of the competition

Since the competition’s inception, the Lions are yet to lose an opening round clash. Melbourne, Adelaide, Greater Western Sydney and Adelaide again on Saturday afternoon have all fallen to the Lions across the opening weekend. The question now for the Lions will be if they can carry that momentum throughout the remainder of the season. While their win against the Crows was an unquestionable delight to many, it would be remiss to not mention the sheer number of players missing for Adelaide, who are to date the competition’s benchmark. The large turnover of playing list in Brisbane lends itself to a great unknown. And while they passed the first test with flying colours, a lot still remains for Brisbane as the season unfolds. Only time will tell.