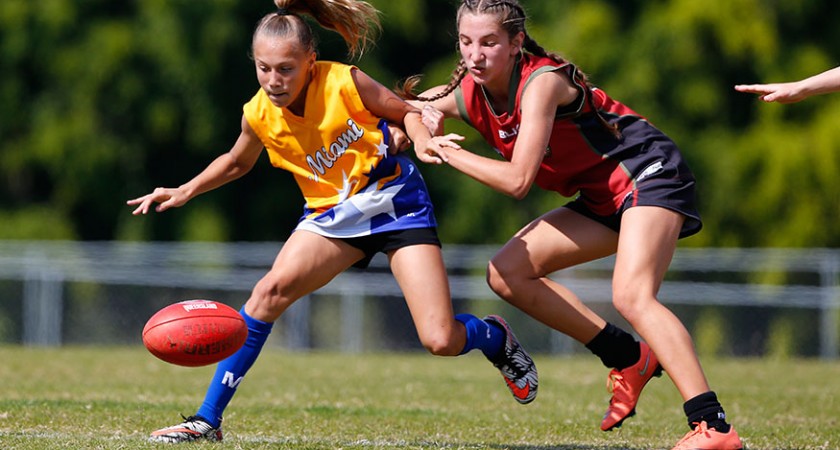 This young team of athletes (some had never played Australian football until this year) will take on St Monica’s College from Cairns in the second Preliminary Final game on Friday 14 October at 4pm.

No matter what the outcome the team will be taking to the field again on Sunday 16 October, playing for a placing in the top four spots of this State wide sporting event.

The team of students in Years 7 – 9 is making Miami State High School history, having progressed to the first state wide competition of this prestigious Queensland school’s AFL competition.  Previous girls AFL teams have only represented the school in competitions at a local or regional level.

The road to the finals for the young Miami team has been exciting, with the players having a fun, can-do attitude at each stage.

After winning the Regional Finals, the team had a convincing win of 78 – 11 against Springfield Central State High School to take out the State Qualifying Final round.

At the Semi Final round of the AFLQSCup, Miami State High led the whole game against St Teresa’s Catholic College, but it was a close finish against a school that offers a sporting AFL excellence program.

“The interest by the players to participate in this competition came from some of the girls who had played AFL in Primary School and they wanted to put a team together,” says PE teacher Pippa McGinniskin from Miami State High School.

“Our team is gaining momentum and we are starting to see a cohesive game play, while still maintaining a sense of fun.  We believe this has contributed to our success thus far.”

“As a PE teacher I’m always trying to motivate our students in Years 7 to 9 to get active and play sport.  Girls can often lose interest in sport around the age of 14.  It is important to keep them active as it builds confidence and keeps them on track while they try and navigate these tricky years as teenagers.”

“With the focus of the upcoming Commonwealth Games and the push to get more women in sport, this has been a great help at attracting more girls at school level to play sport,” says Miss McGinniskin.

“We have developed a lot as a team and have made many new friendships along the way,” says Liv Stephenson, a Year 9 student at Miami State High.

Students Josephine Dutton and Ashley commented that they think they have done really well considering some of the team have never played much AFL before.  “It just goes to show that AFL isn’t just a male sport.”

“This tournament has inspired me to continue to play AFL when I am older and continue developing my skills,” states Bianca Perry in Year 9.

With the new national AFL Women’s league that is soon to be televised, we hope Miami students will be recruited to future women’s teams.”