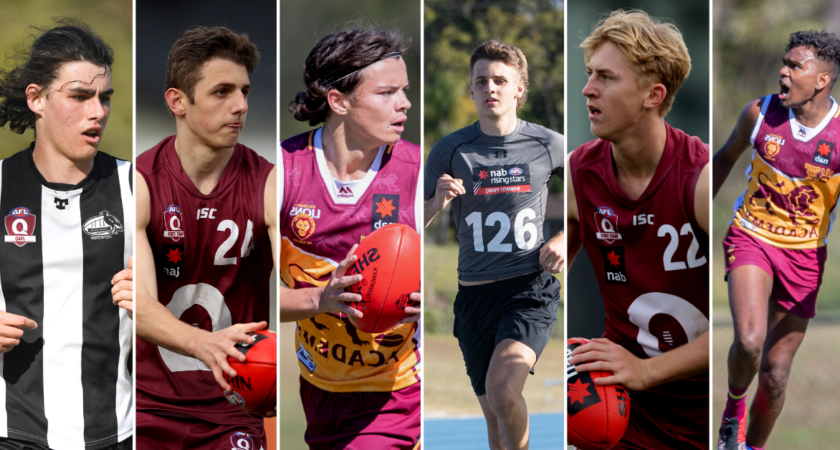 The 2020 NAB AFL Draft will be held as a one-night event on December 9 and is set to be a draft like no other.

This year will be defined by interruptions, season suspensions and a lack of games brought on by the COVID-19 pandemic. But throughout the struggles, the AFL fought on, bringing together a love of football that saw the season prevail. Now that the dust has settled, it is time to look towards the draft and the prospects that could find themselves on an AFL list in 2020.

Queensland clubs Brisbane and Gold Coast hold seven and four picks respectively, with the Lions securing a future first round pick thanks to the recent trade with Melbourne. While Gold Coast still holds a 2020 round one pick to propel their 2021 season outlook.

A host of Queenslanders will be hoping to be selected but will be subject to the same Academy bidding season as previous years, while Blake Coleman, Saxon Crozier and Carter Michael have the potential to get a leg up from the Lions Academy but are predicted to be selected as late first-rounders.

The SUNS will once again be allowed to pre-list any Academy players without having to match bids this year and have a flurry of Academy prospects in the likes of Alex Davies, Aiden Fyfe, Max Pescud, Jack Johnston, and Rhys Nichols.

In part one of our NAB AFL Draft preview, we will look at the top prospects from the Brisbane Lions Academy.

With his speed, strength and agility, Coleman has proven to be a highly skilled forward and one of the most explosive talents in the 2020 draft.  Finishing his year strong, Coleman helped Morningside win the senior QAFL Grand Final, kicking two goals and setting up numerous others, easily positioning himself as one of the best players on the ground. With a brother already at the Brisbane Lions, it will be fascinating to see if Coleman gets selected as an Academy pick on December 9.

A Maroochydore junior and Brisbane Lions Academy prospect, Carter Michael was impressive during his 2020 QAFL season and Academy Series against the Gold Coast SUNS where he averaged 18 disposals. A medium midfielder/defender Michael’s greatest strength is his kicking, speed, and ability to play smart contested football. A strong prospect in this year’s draft and one to watch.

Crozier has rounded out his 2020 season with sterling performances in the QAFL semi-final victory over Palm Beach Currumbin and then again in the Grand Final against the Broadbeach Cats. His composure under increased intensity saw him find space to earn uncontested possessions and set up important goals within the match. A tall midfielder/wingman with clean hands and a strong work rate, Crozier showed his athleticism at the Queensland Combine in early October. Eligible for selection to the Brisbane Lions as a member of its Academy under AFL rules.

Standing at 179cm Tahj Abberley is an eye-catching midfielder, who utilises his speed, elite agility and clean hands whenever he is on the field. Playing for Wilston Grange in the QAFL, Abberley was a consistent standout throughout the 2020 season, kicking memorable goals and winning the ball through the middle with ease.

One of the better young ruck prospects around, Samson Ryan has had a consistent and competitive 2020 season as Sherwood’s primary ruck in the QAFL senior’s competition. Ryan dominates hit outs and aerial contests with his remarkable size and reach. The former Allies representative will turn 20-years-old on draft day technically making him a mature-age prospect under the current format.

A Toowoomba local, Jack Briskey is an aggressive and highly athletic key position draft prospect. Jack had some outstanding performances for the Brisbane Lions Academy squad and the Sherwood Magpies in 2020. Achieving a top 10 result at the NAB Draft Combine leaping 94cm in the running vertical jump and holding 2.94 seconds for 20 meters, Briskey has proven his draft potential.

All players participated in the 2020 NAB AFL Draft Combine.

A lifetime love of Aussie Rules has seen Yeronga South Brisbane legend John Corless, receive a Medal of the Order of Australia (OAM) today for his service to... [more]

Please find information relating to the 2021 Level 2 Coaching Courses for the South East Corner. Please feel free to share through your networks.   ... [more]