ABOUT THE TROY CLARKE SCHOLARSHIP

Troy Clark’s life was all too short

In October 2013 Queensland’s AFL community lost one of its greats, with the tragic passing of then State Development Manager, Troy Clarke, aged 44.

An AFL Queensland Hall of Fame member, Clarke, played 68 games for the Brisbane Bears between 1991 and 1996 and was the only North Queenslander on the Queensland Team of the Century shortlist.

Clarke showed courage and commitment as a player, but it was his impact on footy after his retirement that will be his true legacy to the game.

To commemorate Clarke, AFL Queensland and the Clarke family launched The Troy Clarke Scholarship in 2014, with Tom Matthews from Darling Downs the inaugural recipient.

Troy consistently displayed wonderful values such as dedication, passion and respect and the scholarship aims to honour him by supporting a young person from regional Queensland who displays these same values.

Sydney Swans player Kurt Tippett, who was discovered by Troy as a teenager, is the Troy Clarke Scholarship Ambassador.

“Clarkey’s genuine love and passion for footy was infectious and the level of support and care he showed everyone in the football community was unwavering,” said Tippett.

“He patiently and very simply guided me through the ins and outs of all things football. The belief he showed in me was enormous and gave me the confidence to continue the path even though the trials of learning a new game looked insurmountable at times.

“I, like many others, am forever grateful for the impact Troy had on me personally and for the huge role he played in my career. I am very proud to be an Ambassador for the Troy Clarke Scholarship.”

The application form frames the Troy Clarke Scholarship and outlines in detail the background, criteria, process and distribution of any funds 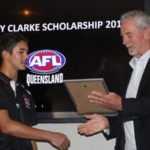