U18 Preview: Queensland vs. Northern Knights 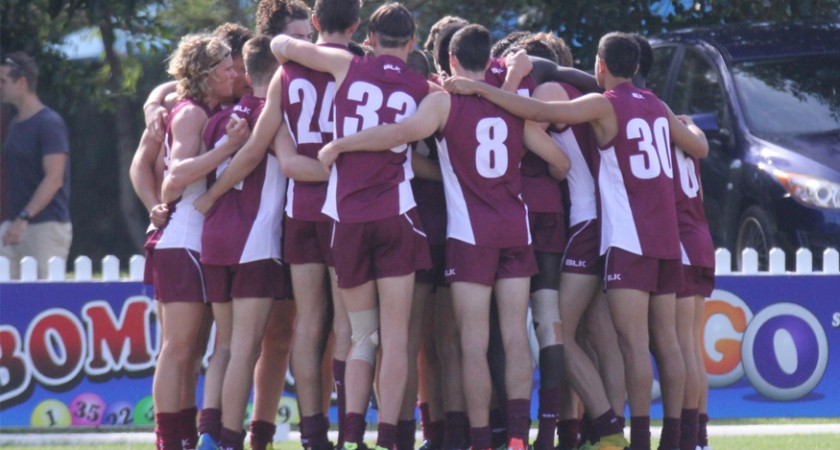 Tomorrow, the Queensland State Academy team will play their first of two TAC Cup games against the Northern Knights at 11am.

That will make it two games in six days for the squad, who took on Victoria Country on Sunday.

Andrew Wiles took a look back at Sunday’s game, and previews this week’s clash below.

You can follow all the action in tomorrow’s game LIVE on www.aflq-new.fspdev.com from 10:45am.

Going down by just 12 points, the Queensland team took a lot from their first game together in 2016.

Playing in Melbourne is never easy, the conditions are always tricky on the soft ground in the cold. The pressure of coming up against a Victorian team is also a big learning curve. The intensity goes up, as does the speed of the game, and every possession comes under pressure.

The result showed their game plan stands up in the heat of the battle, and with a bit of tinkering, they are on the right track this year.

What was taken from it?

With such a young group, they took it right up to some of the nation’s best.

“We had eight 17 year olds playing, which is a big number in a group. They competed for three quarters; it was only a 10-minute period where they got us. They kicked about four goals in a row. Once we then slowed the ball down and focused on the contested ball, we got back on top. We actually out played them in certain periods of the game, and these are some of the best kids in Victoria,” Coach Adrian Fletcher said.

What tomorrow will look like
If Queensland have it their way, it’ll be a quick, open game of footy. Contested ball will be important, but the maroon jumpers will love to break open the game on the outside when they are in possession.

Who impressed/ is tipped to back up well

Declan Watson has been a rock down back, will be hard to beat one on one tomorrow.

Connor Ballenden marked everything that came his way last weekend. If he can get off the chain, look out.

Handling the pressure will be A1. There will be a few nerves, especially in the first five minutes, but slowing the game down, being measured, and then pulling the trigger on attacking forays will be a big focus for the team.

“These games are massive. We get the group away from home, they bond, we train, we have train meetings, it’s exactly like an AFL team does. We are trying to teach them how to perform on the big stage,” Fletcher said.

“These TAC Cup games are crucial this year, especially with the earlier national championships. We have to get the group playing their best footy as quickly as possible.”

AFL Selection – Round 4
RECAP: QLD U18 vs. Northern Knights